It's not all puppies and butterflies...on the homeless population

There is a very visible homeless population in Indy. On every third street corner of the center city it feels like you see a panhandler or someone sleeping on a cardboard box. I am not sure why its so visible here, but it is. Perhaps its because there are no laws against panhandling here. Perhaps its because its that there is a larger unemployment rate than other cities. I'm honestly just making slightly educated guesses here. Whatever the reason its present and if you travel through the city and observe you can't but notice it, or really notice them, the people.

I struggle with panhandlers in general. Perhaps its because I've been told all kinds of things about them, that they just want drug money, or to buy alcohol or that they are scam artists.  And well maybe they are, but there are a lot of homed individuals with the same issues, and they are still people. So because it was constantly in my face here, I did a little bit of research. I looked up how I could help, if I could help and what was really happening.  I read posts and tried to figure it out, to wrap my head around the issue.  And while I'm still a novice at the issue, I do now understand a few things through my searching.

First, of all the things from the pieces I read, the one thing they said to do was to always acknowledge the person. The homeless person is a person, and while its not always possible to do so if you are going by at high speed on car or bike, if you are stopped or walking by greet the person like you would any other on the street.  And sometimes I am wrapped up in my family chaos that I can't see outside my own clan that is on the street trying to get somewhere, but just thinking about this has made me want to acknowledge anyone that passes by on the street.  Especially for my boys who seem to like to run into another person passing by, it probably is a good idea to say hello to other street travelers in general. I mean I sometimes do, but I think I'm going to try to make a point of doing this, and to a homeless person that is ignored most of the day, perhaps this could be a good start for me to grow in my heart towards humanity and perhaps they won't think all of humanity thinks them less than human.

Because I'm seeing this with all the children in tow, we have been discussing homelessness together. It's interesting to hear their thoughts.  My oldest has a big heart but also has so many questions about everything.  He's already been unafraid to speak to the street population, but he has pointed out things I did not see while driving at times.  Today he witnessed a man fall off a bench getting into his wheelchair and it just broke his heart. My middle guy had a homeless woman who was panhandling at the time reach out to help him when he dropped our load of water bottles on the street. I asked him what he thought of that and he said he was thankful she helped. My 4yo thinks we should be giving them money as she sees others doing, and while that is an option, we opted to do something different for the homeless with our money.

We decided to give to an organization in the city that directly works with the homeless.  This way we could know that resources would be given to more than one person that is homeless and help the initiative in the city to help this population. We also decided that we could carry some extra store bought water bottles with us and give out a few to those we stop by along our journeys in the city.

And last we are going to continue to keep these folks in our prayers and conversations. One of our goals as parents is to raise children that see dignity and worth in each person and this I hope is part of the conversation in doing so.  God Bless. 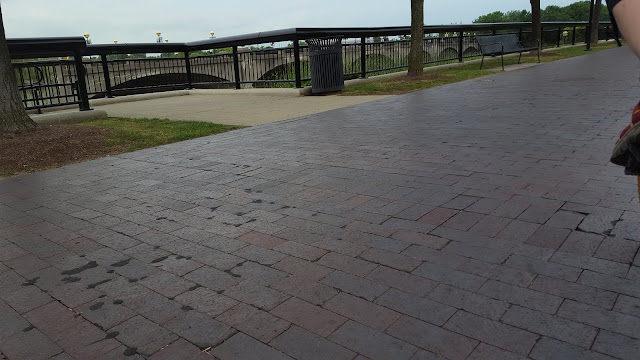 Check out the other indy posts here.

Posted by Contranaut Girl at 9:01 PM