I figured I'd write this post to you.  Your brothers have been obsessed with dinosaurs lately, first it was Dinosaur Train related.  Ephraim's casts has been full of dinosaurs from this show. 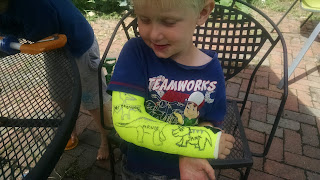 Then, I introduced them to the Land Before Time and it seems there has been no going back.  Sure they appreciate Dinosaur Train, and will watch it, but there is something that has captivated them with these characters from your mama's own childhood.  And honestly I'm okay with that, to me they were pretty great characters.  My favorite is Duckie, but Benjamin seems to like Little Foot and Ephraim likes Cera and Spike. In this obsession, we have been finding many dinosaurs around the house eating appropriately.


And with this obsession, my artist in me has come out and honestly I like it. I get to draw things and the boys enjoy painting them.

So what I think I learned from this all is that I am glad to rediscover my like of drawing.  I sometimes wonder Lena girl if as a teenager I let peers or mentors influence me too much. But also maybe the perfectionist came out and saw science as a safe way to get through school.  I was good a science, and I knew there were jobs in science.  It seemed less subjective than art or architecture, and so that's what I chose.  But Lena girl, I think that maybe what I want to teach you is that it is okay to take risks, it doesn't mean that you have to do so, but that it is okay to fail. Its in failing that we learn.  I need to remember that more often than not, because maybe just maybe I can try things and fail and it will be okay.  And for now, I'll keep drawing dinosaurs, and probably fail at this sometimes too. :)

Posted by Contranaut Girl at 9:53 PM No comments:

This evening I was watching a film on Netflix where the protagonist had an old soul as some would call it. One of the best lines was that he stated he wasn't going to miss out on something great just because it was hard.
This made me think about the dignity and value of each person. As you know I think a lot, probably annoyingly so. And as life has presented itself there have been some people in my life that have been particularly hard to deal with. I've spent countless hours praying and thinking about what to do with them, how I could love them because with them comes lots of heartache and its just sometimes so hard.
But in those moments when I just want to completely walk away something stops me. Something tells me that as completely impossible that this person is with all their baggage, they are also loveable, because they like me are made in the image of God.
And I don't condone abuse to any extent, walking away there out of self preservation is a necessity. But most relationships are messy in their own way.
We bring our brokenness with us everywhere, and I think sometimes we forget that everyone has this same yet different brokenness, and its okay. That brokenness is redeemed in Christ, and as messy and as unlovable as some people put on to be, there is a person in there shouting out the need for love.
So do we choose to love them in our own flawed and messy way? Hopefully yes. Because after all He loved us first, and He thinks each and everyone of us is worth it.
Posted by Contranaut Girl at 11:07 PM No comments: