Two posts ago I did a tips post and I felt like a fake for doing it. Tips posts are not me. A nice woman approached me about doing a post reminding people about national safety month and I was excited to have someone approach me about blogging so I did. But I should have said no, because that's not why I blog. I blog what is on my heart, or on my mind or what my crazies have said that has stuck with me. That's what I'd authentically me. And I just wrote a post on this which apparently did not sink in or it didn't transfer off the page to my actions. Whatever it was, I screwed up. I made a mistake and did exactly what I didn't want to do.
And I wonder why I did it. I think there's a few reasons, one, I have trouble saying no. In my life I've recently recognized that I'm a rescuer, and that means I tend not to be honest and fail to say no to something as not offend. Some people would call this being polite, I've since learned that it's not really beneficial to healthy relationship and shouldn't be deemed as so.
The other reason is numbers. It feels good to me when people like me and interact with me and so I thought, hey why not do the cute tips post thing and gain viewers. But this is just wrong for me, it makes me crawl in my own skin, and its not why I should be blogging. Because if just want numbers, then I really don't want to be who God wants me to be, instead, I want to be who man wants me to be. Its just not okay for me to do that. And so I'm sorry, I'm sorry for selling out for a post, I'm sorry for falling into sin with this all.
As a result, I've reevaluated my social media presence, I've shut down my Facebook account, because once again the likes they play into my weakness of numbers. I'm still not sure what exactly to do with the blog and twitter, twitter isn't usually about numbers with me so it may be treated differently, but the numbers of the blog, the validation from others instead of God, that's got to go. And so I'm going to lay low for a bit. I need this time, my poor soul really needs this time. So bear with me, I will return.
Posted by Contranaut Girl at 8:44 PM No comments:

One of our favorite parks in Cleveland area is Lakewood Park.  Its full of wide open fields and water front views and a good playground too.  There is even a pool there, but we've never been to check it out just yet.  It looks great, so I am sure if we did check it out we would love this park even more.

Here are some shots from our adventures yesterday. 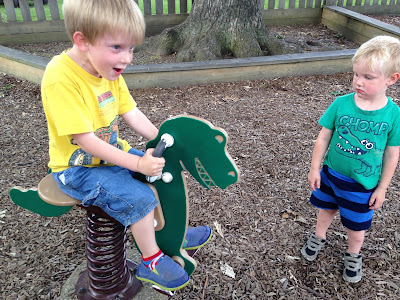 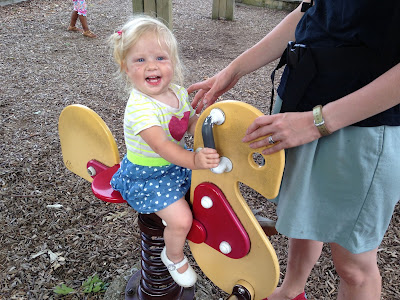 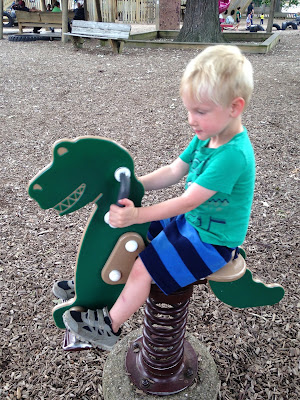 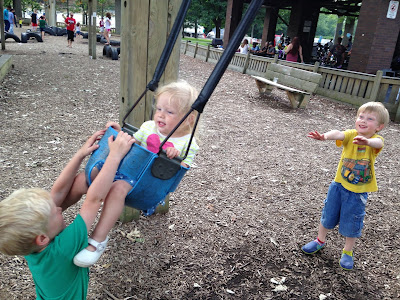 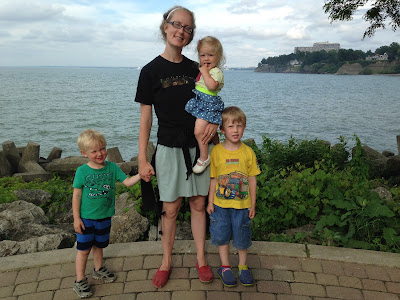 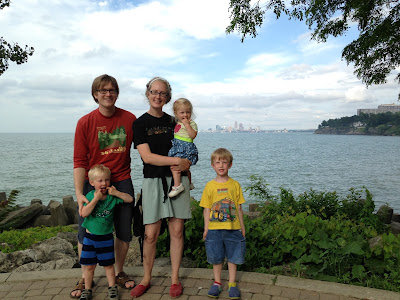 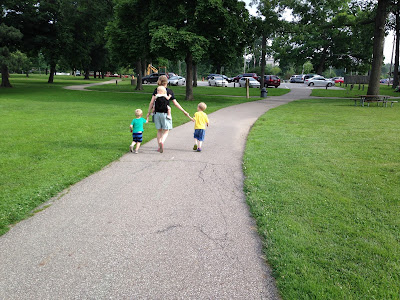 Posted by Contranaut Girl at 10:11 AM No comments:

Summer is here, well in a few days at least, and with summer comes different challenges and adventures. If your kids are like mine this means lots of outside time, whether that be at the pool, the backyard or a local park. My children love to explore and challenge me in these months and sometimes it's a little overwhelming but I wouldn't have it any other way.

Safety comes to mind. Because, in all the new adventures, I want to make sure my little ones can keep going. And I'm not perfect at it and we've had our share of ER trips and poison control calls through the years. But most of the time we manage to keep our heads at least afloat.

So here are five summer safety tips that have helped us out.

1. Know your environment. Look and see what the kids might try to explore and check and see if there are any red flags that should be of limits or at least only exlpored with and adult. Sometimes this can be in a house too, especially if it's an older house, lead paint fixtures and areas are definitely red flags to be avoided. We had this happen with a back porch of ours and since then, it's been an off the limits zone until the porch is sealed off from its toxins.

2. Keep hydrated. I know it's been said a million times but we've been caught it with signs of heat exhaustion and having water nearby helped us tremendously. We usually pack a Nalgene bottle or two full of water, but have in the past or for more extreme outings have used Camelbaks.

3. Minimize sun damage. We all know that we actually need to get some sun exposure for our bodies to soak up some vitamin D, but we don't need to be overexposed.  Too much sun leads to burns etc, and so one either chooses to cover up or put on sunscreen.  My sunscreen hating kids usually will choose to cover up with a hat and long sleeves over sunscreen, but in places like the beach or the pool sunscreen is a must and they withstand it for those kinds.  As for sun hats we like our wide rimmed boat hats like these from Sun Protection Zone.

4. Be smart with bike safety.  My boys enjoy riding their bikes so much, but we have a few rules for safety that they must follow when doing so.  First, they must have a helmet, and they must be wearing closed toed shoes.  We are fan of Safety Town programs or setups too, this helps a kid get acclimated to the rules of the road as a biker and helps them to be cautious when riding their bike around.

5. The only go up if you can get down rule.  My kids are climbers, but I really try to emphasize the prior concept to keep them safe.  If they can't get down from somewhere without help, then they probably shouldn't try to go up it.  I honestly think this keeps them safe and also builds confidence because if my child has gotten up somewhere I'm not apt to take them down, he has to figure it out himself. Granted if its a red flag zone in the first place, well, down they go and that's another issue all in itself.

Bonus safety tip: The patron Saint for Safety is St. Barbara, so if you want to have some extra help to keep your family safe, asking for the intercession of this lady is right up your alley.

Hope this helps you to have a safe and adventure filled summer!

Posted by Contranaut Girl at 9:46 PM No comments:

Ephraim recently learned to ride a bike and he escaped one day to ride it down the block without supervision and I told him three years can't do that. I said maybe when you are seven, but you are three. He then replies, "I'm seven." If only, little guy is determined to be big.

At bedtime post prayers, Ephraim declares that in 20 days he will be seven.

At the drive thru I saw that the lemonade was diet, and so I changed it drink order. Ephraim then asks, "Do bad guys drink light lemonade?"

When asked why the lemonade pitcher was on the ground of the living room, something that wouldn't normally happen. Ephraim piped up, "Because I drink it without any cups."

"I don't like poop, because poop doesn't taste good." I'm not sure I want to know how he knows this.

I asked him what he wanted to be when he grew up. His response, "Ephraim, the big green frog." Rhyming for 20 with Clifford the big red dog anyone?

In noting that he was eating more than his share of garlic scares, "I'm going to eat all these mama because Ben doesn't like them."  Go right ahead little guy.

And last, "Mama, you need to sit beside me, because I like you."  Well, I like you too buddy.

Posted by Contranaut Girl at 10:50 PM No comments:

Influence and owning my choices

I've been working on the concept of owning my choices in my life. I unfortunately have been not good at this in the past and instead tend to fear judgment of someone not agreeing with me, how crazy is that? Probably not so much, but if it leads to a life of fear that's not good, not good at all.

Being Catholic for over 8 years now!!!, it's always interesting when I come into contact with someone from my past who doesn't know that, and then to actually know that maybe their example was a precursor to my Catholicism.

I went to a Southern Baptist college for my undergrad degree. They were very Baptist in many ways, and I thank them for that, but they also were shockingly open to having Catholics and more liturgically based denominations in their faculty. I grew up Presbyterian, and liturgy want foreign to me, but the Presbyterians were becoming less so and in my college years I was too. I joined the ranks of the non denom movement and enjoyed it but it left many questions and I didn't know that becoming Catholic would satisfy a great deal of those and open more avenues to truth but it did.

I feel like I'm digressing though, so to pull it back together, I need to tell you that I went to wedding of a good friend that I met during my college years. She is an amazing woman and I'm so happy that she was able to find an amazing guy to spend her life with in marriage. At this wedding, there were a few blasts from the past. One of them being a key player for me in my faith life. First I went to a small school so we had many encounters with professors families and their family life in a good way. This particular professor was the first person I encountered who was a providentialist and really open about his faith and acceptance of children. I had grown up one of four children and honestly 4 children seemed like such a huge number growing up because rarely anyone I knew had more than one sibling maybe two. But to be okay with 6+ children and be open to whatever God  gave you, that was radical. And honestly at the time I didn't get it, not one bit. But seeds, seeds of understanding were being planted despite of me.

This particular professor also was one of the first people to put science and religion together in a way that they were harmonious with each other. There were others who did this in little ways, but this particular person set the precedence for what came to be my understanding of natural law. That no longer did my love of science have to fight with my faith but they could go together, and I'm truly thankful for that.

So many times we wonder how God's grace is working in our lives and we question and we despair even maybe. But then things like this, they help, they help to see that you really aren't alone. That God does have your back every step of the way and for that I say thank-you. Thank-you, Jesus. And as for owning these things, well I want afraid to say to this person who I was now and what I did. This is progress, definitely progress.

Posted by Contranaut Girl at 10:38 PM No comments: