So I did the accent vlog. I included my husband in it because we grew up in different areas of the country and have definitely had different exposures to areas where accents could be different.  I originally heard of the accent vlog thru those associated with the Blathering, and while I am at the most on the outer fringe of being part of the in crowd associated with the Blathering, I decided to go ahead and shoot it. I am also super huge and pregnant in this at 40 weeks 5days, in case you were wondering.

So here it is.

The notes associated with the vlog are:

Okay for some reason this took like a month to write, so the date was almost 4 weeks ago, but everything else is pretty current.

Usually this kind of post would be something I would write after a spiritual direction section. Nonetheless this is pre-one of those sessions.  My husband and I went out on a date yesterday and it was really nice to get out because the kid has been super clingy so we weren't able to do much for like a month without him.  But he let us go out on a date without him and he didn't do his escalating crying thing which is awesome because we did have to go back and get him due to a puking incident.

So the conversation we had started with me not being content with how I was living out who God called me to be. In the way that I am good living out my vocation as a mama but I feel that there is something like a niche missing.  I've kinda felt this post grad school for a while, but I just haven't had much time to think about it.  Most of the time there other stuff to do or sleep to be gotten.  I've been selling books on amazon and attempting gardening, but I still feel like something whether it be volunteering or doing something jus 2 hours a week that makes me grow.  And honestly, I still haven't figured this all the way out.  Maybe spiritual direction is good for something this time after all.

But what we did seem to tackle is a bigger vision, one of challenge. Being open to life comes with challenge.  It can be hard if an unexpected life is made or that maybe that a child has a disability which means extra attention and time have to be given or maybe life may seem chaotic with multiple kids that are closer together than what the world says is okay to have siblings.  But this challenge is an awesome one to be faced with because it deals with life. And life is something that should be celebrated.

So as we take on a new baby into our home (whenever he or she decides to come out!) it will be a challenge.  And God willing in the future we will have more babies to love.  But instead of wanting a comfy life where we only do what we want to do, we will be open to what God wants us to do in our lives.  And this is the challenge and it will be embraced...or at least give our best effort to do so.
Posted by Contranaut Girl at 10:14 PM No comments:

It's just an average right?  Averages barely mean that any child will be born on their due date.  But passing it now, or close to it as there is about 1.5 hours left in the day, really it makes me think to say, "Kid you can come out already."

~The End
Posted by Contranaut Girl at 10:31 PM No comments:

Fun at the Apple Farm

Today we went out to the near countryside (as much as suburbia is the countryside) to visit a local apple farm.  It was a really fun experience because they almost made it a slight amusement park but with activities that mostly require physical activity with a fall flavor.  So we climbed and navigated thru corn, and the boys slid and jumped and ran.  I know we kept the kiddo out during nap time but he thoroughly enjoyed it and we did too.  And we came back with lots of apples and cider to enjoy too.  Here is a little evidence of some of the fun we had. 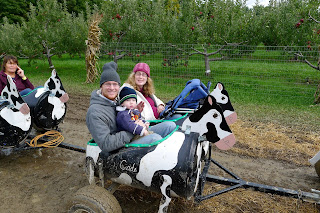 I've decided at 39 weeks that I am now in operation walk this baby out of me.  So thus, walking thru corn mazes and up and down hills were a perfect way to spend today.  I hope you too are enjoying fall.  Part of me is sad summer is over with the daylight dwindling but I am feeling more and more ready to take on a new challenge with baby #2 and am anticipating meeting him or her.

Posted by Contranaut Girl at 10:30 PM No comments: