Well it's snowing outside and its cozy inside (though I could totally go for some good snow shoveling since I'm weird like that). But it will have to wait as the husband and toddler are out at the grandparents indulging in toy trains.  We have had a lot of train play, watching and obsessing going with the toddler, so much that I am constantly looking for places that have train displays for Christmas.
We found on in a greenhouse that entertained the little guy for a while. Part of it looked like this: 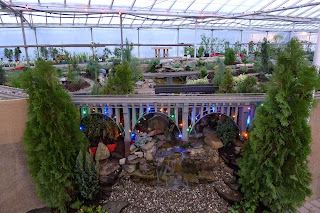 It was a pretty well done display, almost a mini version of the Toy Train museum that we went to over Thanksgiving.
Well, the baby ended up having a rough afternoon, so I'm now blogging at night but its all good.  All I can say is that I honestly love lake-effect snow days where they under predict the snow fall amounts because usually its the opposite.
If you don't hear from me before the start of Christmas, have a wonderful 12 days of Christmas! Cheers!
Posted by Contranaut Girl at 8:39 PM No comments:

Advent reflections in a coffee shop

Well, here it goes.  I’m away from both of my children for the second time, the first time was about 30 minutes so I could go to confession.  It’s my me time.  But you know what it always takes me a little while to not worry about the baby and what his needs are.  I’m fine with leaving the toddler he’s independent of me, the baby not so much.  Needless to say here I am in a coffee shop in Tremont drinking some frou-frou coffee drink.  But its good, well except for the fact that I spilled a decent amount of it while trying to sit down.  I thought out loud usually it’s the small children that I have to clean up after but today its just clumsy me, no excuses.
My husband despite having a super long work day yesterday is being a rock star and taking care of the two kiddos right now.  He lost his voice sometime yesterday so we shall see how it goes.  I hope to keep this up at least twice a month for sanity’s sake.
So how is advent going for you?  I myself have been given the task of reflecting on the Christ child coming as one anticipates a new baby coming.  A baby comes on his or her own time without little say from the mama unless hopefully (it seems weird to say hopefully here but it is due to elective caesarian sections) there is some reason that it needs to be born sooner. So the mamas out there that have had more kids than me can probably attest to the waiting on a baby to come thing especially when overdue is a pain in the butt.  Pregnancy is a weird thing, because by the end even though its easier to take care of the child in the womb you really want them out of you, because 1.) you want to meet them, and 2.) you are so uncomfortable that you just want to be comfortable again.  Now, how does that relate to the Jewish folks anticipating their savior coming?  Well, now its time to hash it out.
First of all we are so used to knowing when Jesus’s birthday is, its December 25th every year, but they didn’t know when their savior was to be born.  They didn’t know how he was to be born.  They really wanted to meet him.  They were tired of being oppressed, and hopefully living in anticipation for ‘The One”.  I know for myself as I said before I was tired of being pregnant, but unfortunately I probably wasn’t the most patient person.  I wonder if the Jewish folks acted irrationally in anticipation of their savior. Maybe or maybe not, but I know I was a little crazy by the end.
So when he did come, they didn’t know how he would show up but he did it awesomely.  And if I think about the little one that was 8 days late! His arrival really was pretty awesome too.  He surprised us all, just as Jesus surprised everyone by arriving in a manger to young engaged Jewish girl. Hmm.
Last, well how did Mary feel.  Honestly being a convert, I still don’t have the relationship with Mary that I want to have.  But little by little I can relate more.  Mary must have had to be in total trust of someone else to let go of all the comments being thrown at her and then to travel at the end of the pregnancy on a donkey, can we say ouch?!  I only liked my birthing ball at the end of pregnancy.  But  the one thing I think she did that I probably could have reacted better in doing, is knowing that all of the pain and suffering she was going through was for something greater than her, and so much better and indescribable when it all came together.
And these are my thoughts for my first time out in the coffee shop.  Until next time, Happy Advent!!!!
Posted by Contranaut Girl at 5:16 PM No comments: