Menu for the week

Honestly I don't do a daily menu but more so make sure I have about 5 dinners planned out for the week.
This is what I picked this week.
1. Southern Cobb Salad
2. Potato Cobb Salad - minus the bacon for meatless Friday
3. Strawberry Spinach Salad
4. Cucumber and Tomato Ranch Pasta Salad
5. Summer Tortellini Salad

Can you tell there is a theme that I am not turning on my oven this week?  90+ with no AC means minimal cooking and thus we get a week of salads. Should be yummy nonetheless.

Ah what a 4 years its been. Praying for lifelong continued happiness.  Its been a wild ride thus far, and I bet it will just get crazier and sweeter.  Here's to continuing to help my husband get to heaven for the rest of our lives, and now our borrowed kiddos from God too.  Cheers.  :)
Posted by Contranaut Girl at 3:50 PM No comments: 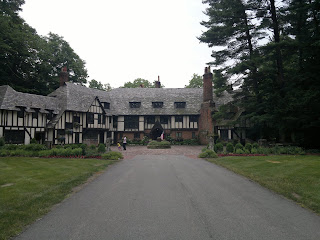 Some rich guy brought over part of a castle from England to make his mansion and later it became an Inn and country club. Me being an architecture closet fan, loved the years behind this place.  The room we had was very nice, and honestly we were probably one of 2 guests the place had that weekend.  A lot of their efforts go into weddings/receptions that they seem to hold every weekend.  So we had some fun exploring the grounds and went into the town of Chagrin Falls to eat that night.  Apparently my appetite came back recently in this pregnancy 'cause food suddenly tastes good again.  I probably still like strange stuff, but the fact that I can eat and enjoy it is awesome.  So thus dinner was good and dessert was good. The next morning we found the room of breakfastland and ate oatmeal, granola, muffins and fruit.  The one thing about this place because they weren't run like a hotel is that if you wanted to know something you had to ask, otherwise you were left to explore on your own.  We probably did split the asking and exploring 50/50.
We were sad we forgot our tennis stuff because they had 5 nice courts there, but we did remember to bring stuff to swim, and swim we did.  It was fun to just relax the two of us and have fun playing water games with Keith pretending to be Solid Snake and me attacking him with a water gun/kick board.
Afterwards, we were set to have lunch at the place as part of our Living Social deal.  So we asked about lunch and they set us up our own private table as we said we were like the only non-wedding folks there, so it was kinda like we lived in our own little world.  The food was simple but good and filling.
So after lunch we went to pick up Ben and well as much as I missed him, I'm not so sure he missed me or rather us.  He was just playing away at his grandparents without a care in the world and apparently was really good for them the whole time.  I guess he's becoming less needy, and maybe its the attachment parenting thing that makes him trusting of a few others besides me.  I dunno, all I know is that God made us be able to have a successful night away and a toddler that was ready to be away from his parents.  Thanks :)
Posted by Contranaut Girl at 12:39 PM No comments: