snow, non-studentdom, and other tid-bits.

I realized that I haven't blogged in a while. I wanted to write a post on compassion vs. moral obligation, but I totally don't have the brain capacity to delve into it tonight.  There are a few things happening around here, some good, and some I'm not read to discuss.

Anyway, yesterday we had a huge blizzard that actually closed CWRU, which is such a rareity since Case stays open for almost everything that I feel like it should be marked down in history so that's what i am doing.  I also decided that I would much rather have a blizzard than a tornado which happens in the warmer climates during this time year.  Having experienced more tornadoes than I would like to in my college experience, I can vouch for this want of a blizzard.  I honestly think this would also be one of my major deterrents for living in the southern midwest. Well, that and the insane humid summers.

Thursday, I officially turned everything in for graduation, and this means I have no more obligations to the school that impend my graduating.  Instead now I must clean out my office and turn in my keys.  A sad day it might be that I do that, but at least its no longer impending doom.

Ben has developed this hair pulling habit that I think he does out of frustration, but I don't really understand why he wants to self-inflict pain on himself.  If this something I should worry about let me know.  I think its simply a sign of more teeth further back in the mouth coming in.

We went to a birthday party today and it was fun.  However, this means that Ben's birthday is approaching upon us.  It's crazy to think that he is soon one.  Or as my husband says he will upgrade from 3G to 4G.  Apparently 4G is meaningless but I guess to him this is his way of saying that Ben is having a birthday.

So yeah, I am super tired and so am going to turn in. Have an excellent second part of the weekend.
Posted by Contranaut Girl at 9:49 PM 1 comment:

1. Ben took some first steps a day shy of 11 months, and I was super excited for him. But I am sure I will miss my baby soon.

2. I screwed up a deadline for graduation and luckily was approved an extension.  But I have totally been working my butt off to get it done by February 25th.

3. Last Friday Ben and I checked out the Children's museum of Cleveland and he loved it.  Unfortunately we had a little fall when there, but the crying was short lasted, and he didn't want the fun to end. 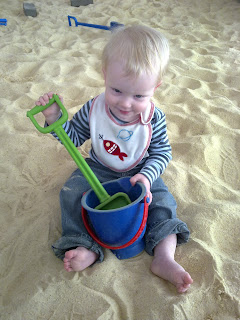 4. Tents have been made constantly with lots of laughter ensued.  And apparently throwing magnets at a refrigerator is hilarious as well.

5. I've been enjoying the Live Out Loud podcast.  I just keep thinking about how I wish I knew more teenagers like the host.  Maybe she will go on to be the next Lila Rose.

6. We recorded another podcast. All about the planned parenthood investigations and other current news.  If you want to listen to it here is a link: The Contranauts Episode 33

7. I am anticipating a warm up this weekend, and even though I like winter, I could do without the block of ice that is my driveway that has been here since 2 Wednesdays ago.

Quick Takes is hosted at Conversion Diary
Posted by Contranaut Girl at 11:30 AM 1 comment:

Granted this is Cleveland, but it seems that lately there has been quite a good amount of snow here.  This makes me feel like curling up with a good book and hot chocolate or tea.  For proof of the constant snow here are some views from my window: 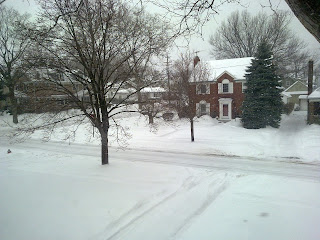 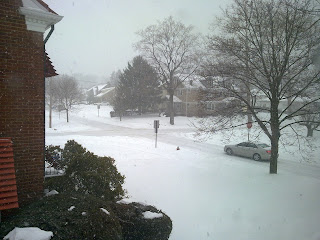 Granted I choose to live here, and actually love the snow, so really I'm not complaining.  I just wanted to give you a taste of our little winter wonderland.
The complaint I do have, is simply I went to the library to pick out a book to read, and was all excited to read a book about living in the city.  But no, that's not what the book is really about.  So after about 10 pages in, I am done with it, and must take it back tomorrow or tonight for a different book.  I realized that I have read most of what are on my bookshelves at home, so the library becomes necessary for new material.  Of the books that I have read though, I think I actually only enjoyed one of them, title The Quickening, all the other ones have just been so so.  I guess part of my issue is that I don't want to search for a book forever, so I just pick one up from the displayed books.  This means, I am kinda judging a book by its cover and I am definitely doing a poor job of it. I am thinking that I should return to the classics or get books that were recommended to me.  I obviously am doing a terrible job of picking things up on a whim. If you have a must read for me than just leave it in the comment section and I will be sure to look for it at the library.  I read pretty much anything in the fiction category as long as its not a romance novel that is just gross.
Posted by Contranaut Girl at 3:35 PM No comments: