We started out the day with another bike ride, this time to the Indiana State Museum. We chose it because with our pass from a museum in Cleveland through the ASTC program you can get into it for free. And free with a 6 person family is a very good thing.  The museum was large, and I don't think we covered it all and will definitely have to return to do so.  It basically covers anything historical that happened in Indiana, whether that be people, animals, plants or technology, or geological. My favorite parts where probably the natural history parts where you walked through caves and saw fossils. Can you tell I'm a bit of a science nerd at heart?
The kids got a bit restless because they wanted more hands on things, so it was good when we found an LED throwing activity that they could take part in, and then there was the giant foam blocks to play with that were fun as well.


We ate lunch outside, even though it was hot, we found some shade and some more interactive bits, some climbing boulders on the side of the museum, which are part of the Watanabe Garden. The rocks made good places to sit and the bigger kids enjoyed climbing over them. Stella would have climbed too, but it wasn't the most friendly 1year old place, so she enjoyed wandering up and down the serpentine path. 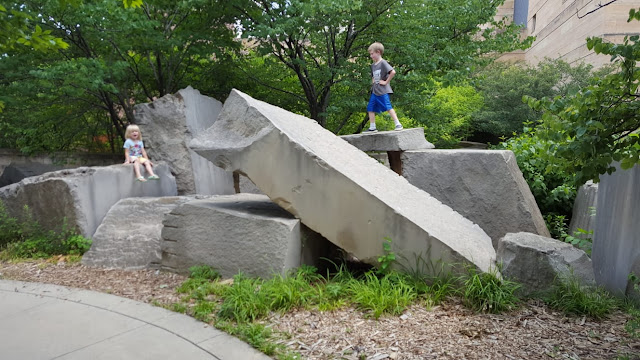 After a hot ride home, we rested. My favorite time of day. :) I then had the crew walk to the local library because they were having an Animal Show, from a local Safari animal place.  The kids loved it, so even though they were whiney about getting out again, it was well worth it in the end. Ben even volunteered, sometimes its fun not having a shy kid. 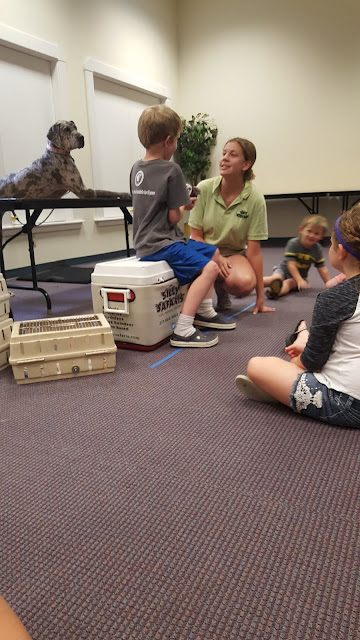 I ended the day with a walk with my Lena-girl to the local yarn shop.  Any knitters out there?  It said it was 450ft from my house, so I kind of had to go.  And it was huge and the employees were friendly. I picked out some yarn to make a shrug and a pattern to boot because it was just what I was looking for. I do believe I will be back.

Posted by Contranaut Girl at 3:20 PM