I have to admit, I'm tired. I am not used to biking every day so I am more tired in the evenings than I was thinking I'd be. So three days of our visit are going to be combined here. Let's start with July 4th.

On the fourth, most things are closed, because national holiday and all. One thing that was open was the movie theatre, and in the mornings, some of the area theaters have free showings of older movies that would have been new just a few months ago.  We ended up at the Brownsburg 8 Goodrich Quality Theatre. Brownsburg is a northwestern suburb of Indianapolis.  One of the interesting things I feel like is different about Cleveland to Indy is how it seems to get rural much quicker here than at home.  The suburbs they have are more of our exurbs. The novice city planner in me wonders how this all is, but nonetheless it is so.

We were able to see Ferdinand the movie. I am a big fan of the book, so I have to say the movie was much different than the book. But I don't think that it takes away from the book, its just a different story, they took the character of Ferdinand and made their own story about him, loosely related to what happened in the book.  It was cute, but somehow I feel like the whole Running of the Bulls and matadors get a very bad rap in it all. I'm not sure where to draw the line in what is art and what is cruelty, but somehow it doesn't feel right to completely disregard what is longstanding in their culture. I also don't know that much about the ins and outs of bullfighting, so I may be romanticizing something that could be not as glorious as it seems.  But even the bee in the new movie couldn't die when it stung Ferdinand, and that was a little over the top for me. It was full of laughs and the kids enjoyed the movie experience greatly.

That evening, the Eiteljorg Museum was free so we checked it out.  It is a museum about Native Americans and Western Art and Life.  I liked it more than the State Museum, only because you could interact with the displays and I think my kids enjoyed the specific children's area.  But I think it also maybe was more interesting to us because it was a broader topic and we had a little bit interest after coming off of reading the Indian in the Cupboard series during the school year. 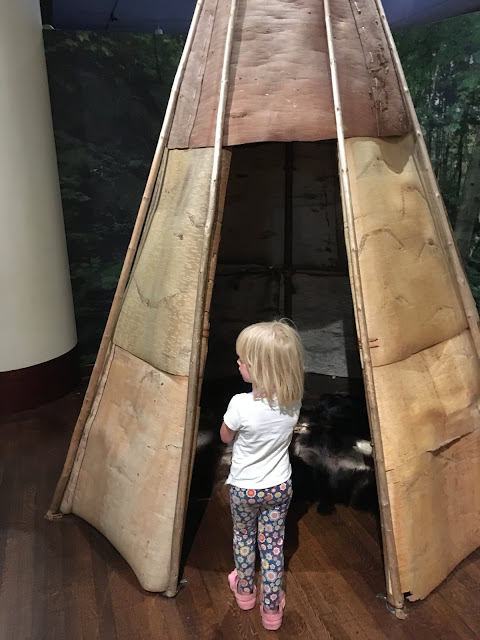 A wigwam made of birch bark


On the sixth day, the only new thing we did was check out the Indianapolis Children's Museum.  We had learned that on the first Thursday of the month, you could get $5 tickets for a 4 hour visit.  We got our tickets, and we knew it would be a big crowd, what we had forgotten about was with large crowds came a lot of traffic.  So getting there took an extra half hour.  But once inside we were good to go, having already purchased our tickets.  We checked out the exhibits and had some dinner.  My favorite part of what we saw was the Dinosaur exhibit, but there are still a lot more things to see and because of that we we got a year pass even though we will only be here 3 more weeks.  Many visits to come, I think.

On the seventh day, we biked to the Indianapolis Zoo.  I was thrown off by the price of the zoo.  Its about 3 times as much for a ticket to the zoo in Cleveland.  It is listed as a participating reciprocal zoo  program member, so I was thinking at it would be half price.  But it wasn't.  Instead it is a non-tax funded zoo and so it has some gimmicking pricing bits to it. They change the price of the zoo depending on the day and they want you to buy tickets online so they can guarantee a number of tickets sold. And though listed as a participating member in the reciprocal program, it only amounts to a $2 discount per ticket.  So for a family of 5 paying attendees, it was $94 to go.  Now the zoo is nice and well done, but I am definitely not going to be returning with my family anytime again during this month, simply because of the price.  A few exhibits were stunning including the underwater viewing tank of the dolphins and the walrus viewing.  The cheetahs were especially exciting to my boys.


Earlier in the morning, I talked to a local resident and she recommended a shop called Amelia's.  It has giant cookies, other treats, a bit of other small assortments of things and bread. Lots of glorious artisan bread.  We bought a loaf of the city bread. It's delicious!  A bit sourdough like, but a good bread is so much better than what you get in a grocery store. And we got a cookie to share, which was large enough to split between the 6 of us.  And so ended our first week.