So weaning.  Wow.  First of all I want to say when I approached the topic I was scared of doing it.  I thought it was going to be super hard and I was going to have tantrums and the such.  Maybe my baby was ahead of his game but really I thank God for helping us through it all.  Because I didn't know how it was gonna all go down and it ended up being way easier than I thought it would be.  Jordana over at Curmudgeonry gave me some excellent advice as a mom who had been through it more than once. And if I didn't thank you before, I will now.  Thank-you, you helped a lot.

I asked advice on this topic in February but didn't actually start the process till March.  I tried in early February to night wean and man did we have tantrums.  But a few weeks later the same thing was tried again and there was success.  It was just odd.  Part of philosophy was that I wasn't going to force it on him to a point.  I wanted there to be a more natural component to the weaning and oddly there was throughout the whole bit of it.  So the second time we tried night weaning it was a success and so then we were just down to 4 nursing sessions a day.  I decided that at nighttime I would keep a sippy cup of water on the night stand for him, and this has saved a bit of screaming sessions from being endless.  I think the kid just gets thirsty sometimes cause he's a heavy drooler.  Apparently this is a family trait from my side of the family, go figure.  Not something that is very elegant for a girl to have as a family trait.

Around the same time Ben was transitioning from 2 to 1 naps a day, and since for him association of nursing with sleep helped us cut down the 4 feedings to 3 in a pretty easy manner.  There was a week in there that he caught a nasty cold and so I let him go back up to 4 feedings because it seemed like he needed it but then when all was well again he didn't object to the 3 feedings.

After this I started noticing that he would pass out in the car on the way home from things like morning storytime at the library and such.  Normally he would wake up and I would nurse him to get him back to sleep.  Well I started feeding him lunch of big people food prior to the car ride home and it worked to keep him asleep and soon we were down to just 2 nursing sessions a day.

The last two nursing sessions were the killer ones to me, just because to me they were the key to having this kid sleep 12 hours at night.  We would nurse before bed to ensure a full belly for good sleeping, and then again at like 6am to give me an extra hour or two of sleep out of him.  So maybe I was a little bit selfish about not wanting these to go away, but who can blame me I am and was pregnant so sleep is precious to me.

So of the last two nursing times, I first chose the before bedtime feeding thinking I could sub out a bottle of milk for breastmilk.  Unfortunately, Ben wouldn't have it.  He would drink the milk fine, but he wanted to nurse too, probably more for comfort but nonetheless he wasn't ready to give that time up.  So I waited a few days, and decided well maybe, just maybe I can get him back to sleep in the morning without nursing him.  Well it worked and then not really.  I think having the water nearby helped, mainly because sometimes he really was thirsty from too much drool, but overall the kid does rise earlier.  But what helped me to continue to get my sleep was my awesome husband.  Who has to get up for work at an earlier hour than I like to get up, so we decided he could take care of Ben for an hour or 2 before work and I could get my precious pregnant lady sleep.  And man am I so thankful for him and his sacrifice and help here.  I don't think I would make it through the day without this extra sleep sometimes.

So finishing this out, the last nursing session went on for a few more weeks, until I noticed a difference in the way Ben was behaving towards it.  He no longer was nursing to sleep he was nursing in like what some would consider a snacking manner and then kicking his way to sleep.  So I just decided that it seemed like he was ready, so I stopped one night and made my husband put him to sleep to make sure he would know nursing wasn't an option that night.  And the first night it didn't work, but the second night it did.  And then the 3rd night due to circumstance I had to put him to bed again and we just cuddled and rocked it out and there wasn't any fight.  So as weird as it was to me I was done nursing. It was 2 months ahead of the deadline I gave myself, and I didn't have any pain from stopping so I guess the kiddo was weaning himself in the process and probably the pregnancy hormones were helping limit the milk.  Thankfully he is still growing well, he apparently gained 1.5 lbs in 2 months(the weaning months) so I know he's still getting food, just from other sources than me.

So that's my first story with weaning.  It was interesting to live it but I'm glad through it all it worked out.  To me it just evidence that if you are persistent about your prayer, God does listen!
Posted by Contranaut Girl at 9:21 PM 1 comment:

I have started a few posts but didn't know how to finish them without sounding like an idiot, so, thus, I didn't.  So to end the lull, I will do a picture post.  Here's what Ben and I have been up to the last few weeks. 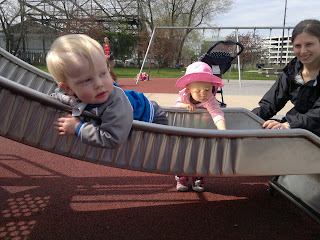 We've been having fun playing in parks. 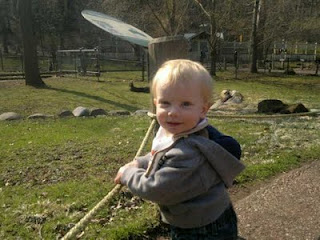 Hanging out at the zoo. 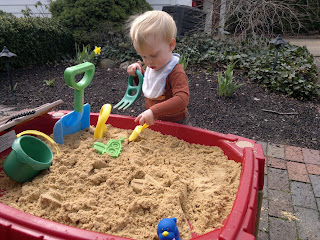 And playing in the sand box/table.
Posted by Contranaut Girl at 8:43 PM No comments: