What I Wore Sunday...It's been a while

It has been forever since I have done one of these.  A lot has changed.  A baby on the way and fall has come.  Today's readings were interesting to me, I feel like the parables seem to apply more now as an adult then they did in younger years.  I guess to summarize the message the priest gave today would be to try to put at least as much effort into our eternal goal of Heaven that we do on our temporal needs.  Considering I just was saying this to myself yesterday, it was okay God, I get it more time with you.

But here is the outfit, and maybe a sick kiddo or two.  The boys have hand, foot and mouth, so mass was a solo thing for me today. I enjoyed it except that I was a bit woozy at times which means I either didn't eat enough this morning, or my iron is low, which is probably very likely as it was borderline when it was checked. 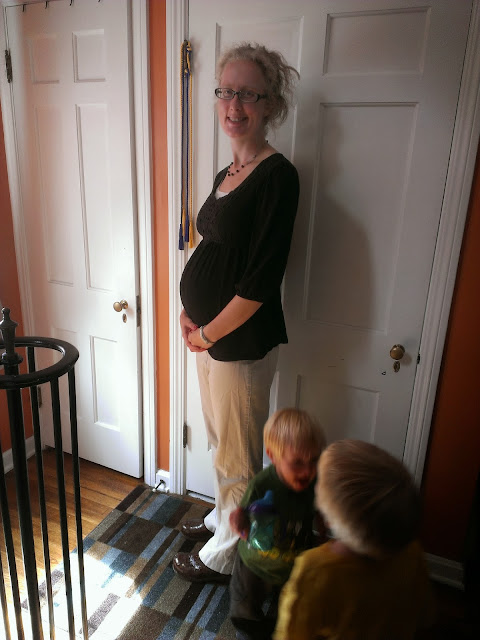 Check out more WIWS at Fine Linen and Purple!

Posted by Contranaut Girl at 1:24 PM No comments:

This blogging thing I do, really isn't a get people on my team thing, but an ongoing snapshot of what is going on in my life and those around me.  Like back in the day when we kept journals, well this is my journal. I would someday be able to give this to my daughter (God-willing I'll have at least one) or daughter-in-law so she can see how early motherhood was in my eyes, and maybe we can understand one another a little bit more. Anyway, here is an update, because well I haven't given one of those I feel in forever.

1. I ended up nursing Ephraim till he was 22.5 months old.  We quit for reals about 2 weeks ago, because really he was done and honestly I was done too.  I guess the motivator came when I started taking an allergy med that I wasn't allowed to take when still nursing.  If you would have told me that I would have nursed a child that long when I was starting out in this motherhood gig, I might have laughed at you.  Its odd how it all worked out.  I think in time it definitely got easier and well he needed it and it helped me to not resent him with his non-sleeping personality that we will get into later.  I think this experience overall made me realize I had more stamina than I thought, and that I started to care less of what people thought of me. With Ben, public nursing rarely happened, with E, it happened all the time, and well it just had to in order to keep going.

2. Ephraim is on a no nap strike and while it is hard, I think that it means he may be done.  I think its just that at the most when he naps right now its 45 minutes tops, and if he does that he is awful to put down at night.  I much rather prefer Ephraim easily asleep by 7pm rather than Ephraim awake till 9:30-10pm. It's just odd to say that because well he's not quite 2. He is little, but he is so different from his brother and well, in most of his life he hasn't wanted to sleep the same as him ever.  I do know he is getting enough sleep by his disposition and how he manages to sleep for at least 12 maybe 13 hours at night straight through.  Btw, this was the child who didn't sleep through the night till 20-21 months old. Yep, and we are having another.  Craziness I know.

3. I'm considering trying to get the boys and I involved in some volunteer opportunity that they can perhaps do with me.  I was thinking St. Vincent De Paul, since it is right down the street, but not sure if it is kid friendly.  Any thoughts?

4. I am going to try out homebirth for this third baby of mine.  Because well, I suck at getting to the hospital in time, I like laboring at home, and like to do natural childbirth.  So why not take the plunge?  I hope I can do it, I sometimes struggle with the idea I get in my head that I am not going to be able to do it for some reason, but I realize that negative thinking and so well, I figure I should spin it around to, "With God, I can do this!"  But if you could send some prayers up that I continue to be positive about that would be great. Btw, totally have a midwife and everything, just still a new experience for me, which apparently seems to be the way things go with me.  I can't do the same thing twice unless satisfied completely, this apparently includes childbirth.

5. I am currently a little over 16 weeks pregnant.  Still too early for me to feel kicks, I know some women do this early, I haven't yet, so still awaiting that.  I guess it was called quickening back in the day, correct me if I am totally wrong, as I am sure to be.  This pregnancy has had its ups and downs, the awful hit quick and hard, but since then has been much, much better.   If only I could tell my sinuses to calm down, we would be all okay.  I keep imagining a little girl with red curls this time around, but I could be totally wrong.  Any bet takers?

6. October is gearing up to be a busy month with a plane trip to Nashville to visit a friend, a trip to Pittsburgh to hang out with the grandparents, Ephraim's 2nd birthday, and an overnight in Ohio Amish country to end it all.  I have no idea how we got so busy so fast.

7. I signed up once again for a bible/religious book study where the boys come with me but play in another room.  I have really enjoyed these studies full of women really trying to live out their faith that are full of inspiration for me.  I hope this is another good book.  It is called The Ear of the Heart and its about an actress who decided to then become a nun.  I haven't cracked it open but I think it will be an interesting read.

8. Fall is always an interesting time, as everyone gets on a schedule again and with my kids being little, I sometimes feel left out of the loop.  That and we aren't doing 3 year old pre-school, at least nothing formally.  I have checked out Elizabeth Foss's storybook alphabet books, and have added a bunch to the list that we get every week or so at the library.  I think we are still on letter A, but does it matter anyway.

9. The kids have gotten into Starfall.com.  I randomly saw a tweet by Cari Donaldson about it, and I thought I would check it out.  The kids love it, so already we kind of have to limit the time they spend on it, but even Ephraim seems to be enjoying and learning from it.  All I have to say is Thank God for touch screens in this instance, we first tried it on the computer and they kept wanting to touch it on my screen, totally doesn't work on a laptop. But despite me being a luddite when it comes to kids and learning, I think that it is something that we can use as a tool for good and well it really can't be avoided completely in this life we live.

10. The boys have hand, foot, and mouth disease currently.  Ephraim has it worse.  Ben has had a mild enough case that I simply thought he had a clothing rash from detergent.  Not so, definitely was a virus.  Now I totally feel awful that he was hanging out with other kids that really could have caught it and well might be down for the count like Ephraim is for the next 5 days.

So that is all.  Hope you all are having an excellent weekend!
Posted by Contranaut Girl at 2:56 PM No comments:

And then there were more... 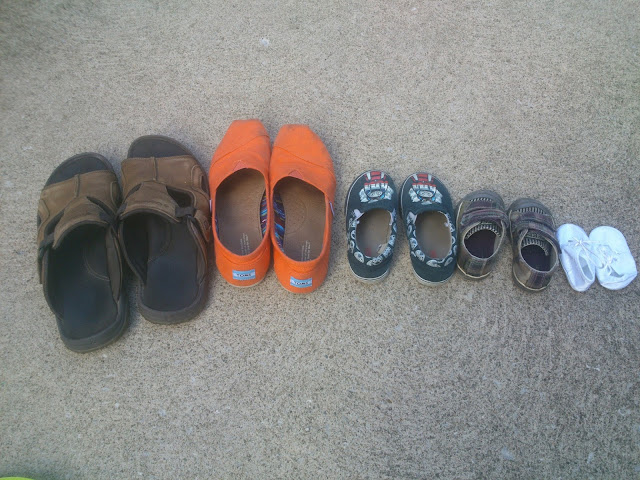 New arrival due in early March.  I'm not wanting to do a pregnancy post yet, so I will leave it at that.
Posted by Contranaut Girl at 4:04 PM No comments: