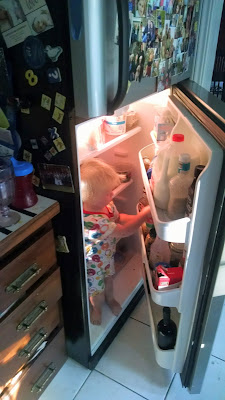 Many days recently, I have found Helena in the fridge. She's exploring and while I used to have a lock on the fridge to keep the kids out and from doing this exact thing, I no longer do.  Now it might just be because the lock broke and I haven't had time to fix it, but its interesting.  It doesn't bug me that she gets into it anymore.  The first two times around it did, thus the lock. But now, maybe I'm softening up, or maybe her personality is different but I no longer need the control.
This has made me think about how I view things that need limits with my children. People say that kids do need boundaries and rules, but I think sometimes when it comes about always having a rule, and never breaking the rule or relaxing the rule, how do we learn. Don't get me wrong, I believe fully in self-control.  I honestly think our society sucks at this concept in general, but I'm being to ponder why.  I'm honestly not sure what all leads to this, there are so many contributing factors probably.

I do think we do have limits and in some things we do need rules, but I think in our society we no longer are allowed to think for ourselves or think differently.  As much as we value our freedom, it feels like we are step by step taking it away to make us only be aloud to talk and think and do things one way.  I'm not so sure this is what was intended for us.

So I was thinking about something, my oldest son, I would deem him an artist, a builder. He loves to create.  I let him draw on the iPad, and usually I regulate the time, but I'm wondering about this.  Because yes, there is such a thing as indulging in something to excess, but the time that I didn't regulate his time, he was able to really create.  He didn't just watch tv shows even though he had full access to them. So maybe its just that I have more kids and with more kids, you loosen up on things, but I'm seeing that control I thought I needed isn't necessary anymore. 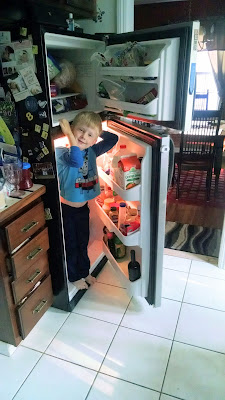 So maybe I'm just rethinking things, or learning.  I'm sure there is another side to it all, but this is where I am at today. And to finish it off, the eldest saw that the littlest could do something, so he did it too, only he is too big to just fit inside the bottom fridge part, so the freezer came open too.
Posted by Contranaut Girl at 3:03 PM