The second day of our NYC trip was spent in Manhattan.  We took our first subway ride that morning to Central Park.  I may have mentioned this before, but I actually like public transit, so riding the subway was fun to me, maybe this is why my boys like it too. Who knows, so we rode from Herald Square to the south west corner of Central Park, because there was a big playground there and better yet, there was an awesome rock left over from the Paleozoic Era, called Umpire Rock. It reminded me a little bit of Devil's Den in Gettysburg, one of my favorite places in this country, so I was an instant fan.  The kids spotted the playground adjacent to the rock area, so I got left with the stroller to cart around, but I got to hike on it again and actually helped out a sweet young guy that wanted to take a picture in the exact spot that his girlfriend did at an earlier time. So all in all, it worked out okay. The play ground was nice and it had water running through a decent amount of it so that was pretty sweet for the kiddos. Here are some shots from that.

We then subwayed it up to a more northern part of the park to check out Belvedere Castle, which showed us some beautiful views of the city and other parts of Central Park, which is pretty huge for just a city park. My one beef about central park was there were always people about, despite being in nature you were always with people, but this may just be because its in Manhattan after all. It did have some awesome things in it, I think we could have spent a week just in the park itself.

We then took the bus back and went down the famous 5th avenue.  And then after we had a break we headed over to the High Line over in the Chelsea district of Manhattan.  Its a really cool park that was an old railroad that was repurposed.  It was beautiful despite the iffy weather. We oddly got the a wondering remark if we were from the USA because we were traveling with three small children, and the women didn't see that often.  She told us we were brave to do so, and maybe we were or maybe we are just crazy.  I'll go with the latter, but hopefully I'm a little bit brave too. But to validate her remark, it was extremely rare to see 3 closely spaced children in the city.  At least on the peninsula, I'm sure there are larger families in the other boroughs, but not so much in the center hub, and honestly when you look at most cities this is true.  But its just so drastically such there, because again so many people crammed into so little space. So here's the High Line. 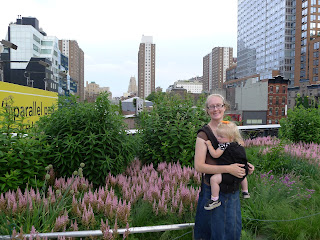 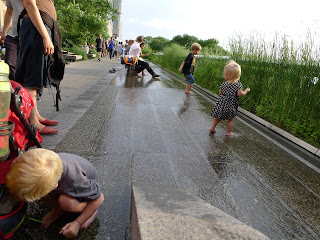 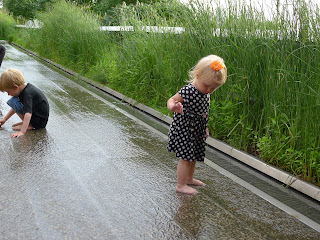 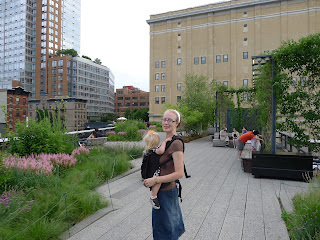 Part 3 another day.  Part one can be found here.

Posted by Contranaut Girl at 10:13 PM