So at this point we were on the way to the hospital, and for me since you have to sit in the car, it was a pain in the butt to get there, as I totally hate not being able to move in labor and this time was no different.  But we made the 25 minute trek and I think I ate a pack of fruit snacks in the process of it all.

At the hospital we went to the ER as that was where they wanted us to be, we checked in there and waited for what seemed forever for a nurse from the maternity ward to come down.  Probably about 10 minutes later she had arrived and even though they wanted to sit me in a wheel chair to get there, I insisted on walking there, so I did while holding on to my husband, my stronghold thru this whole thing.  Seriously wanted to hold on to him during each contraction, which was different than last time but I guess I really needed him as my rock this time.

So we made it to the maternity ward, and we walked down the hall to the Holistic Birthing Center Suite, and on the way saw St. Gerard's statue and I remember saying if this baby is a boy that Gerard is going to be his middle name. When we got in the room, the nurse turned on the water for the tub, and then wanted to check my dilation status.  I really was having issues being on my back so she checked me when I was on my side.  She kind of freaked me out by saying that she didn't feel a cervix anymore, and I really had no idea what that meant at the time and when I learned that I was fully dilated at this moment, I was in disbelief.  I had only been in labor for a little over 4 hours, and only consistently for a little over 3 hours.  My last labor was 30 hours!

Because I was in transition, the nurse called in the on call doctor, because apparently my midwife wasn't there yet.  I got up in the meantime and decided that I felt like using the bathroom.  My water broke over the toilet and then I knew it was close.  The doctor came in and I was told I had to be on the bed and deliver on my back.  This was the last thing I wanted to do, because for the whole labor and even in pushing I wanted to be on my hands and knees, but in OB land this isn't a possible delivery position.  So I reluctantly obliged. The only thing I had going at this point was that it only took a few pushes to get the  baby out probably because it was a second baby, and not my first which took about 2 hours to push out.

When the baby was out, I learned he had his cord wrapped around his neck twice, but they got it off, and it he screamed almost instantly.  My husband said he was bluish at first, but I never saw him that way.  And when we knew he was a boy we named him Ephraim Gerard.  A few unfortunate things happened due to being in OB land, such as getting a shot of pitocin because I apparently was bleeding a lot, the cord being cut too early, and my placenta being pulled out.

To not end on a bad note, there were good things about his birth. They didn't wisk him away but allowed me to do kangaroo (skin to skin) care for 2 hours post birth, and there was no monitoring of fetal heart rate due to lack of time.  So even though it wasn't the ideal water-midwife birth, Ephraim was healthy and beautiful with a full head of hair. 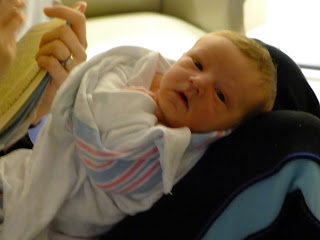 The END.
Posted by Contranaut Girl at 9:58 PM