And we have a six year old! Buddy, you bring us so much joy with your enthusiasm and your creativity. We never know what you will invent or make next. You get an idea and follow through to the end. You are determined to be the fastest and aren't afraid to try new things. Happy 6th birthday, Ephraim Gerard! 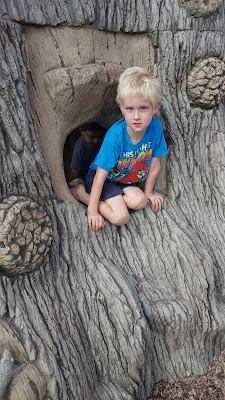 I would say its all very true. There are things that just appear with this one, like, lets make a paddle out of a stick and duct tape or we apparently needed a tree on our wall for some scenery because there it was. A profile of Mario is methodically made out of Lego bricks or a map of the local aquarium is drawn out in scroll form. My hope that his creativity never goes away we appreciate it despite never knowing where the scissors or tape are in the house without an inquiry from Ephraim.

He has the biggest heart for his baby sister, probably because everyone tells him he looks like her and he loves that someone is like him.  He will make the silliest of noises or a crazy stunt and make Stella laugh uncontrollably.  There is definitely a neat bond there that I hope matures with time and lasts for the rest of your lives.

You pick up things quickly but can be fierce in resistance when its something you don't want to do. You are adventuresome in what you do as you declared to me yesterday that you touched 10 sting rays at the touch tank while I turned up my nose at the fish scrap infested waters. You keep us moving and you are always up for a good race. You even are willing to rise early to voluntarily watch your mama play soccer at 8am and then also be the ball boy on top of that.

May you never stop running a million miles an hour or creating worlds upon worlds.

We love you so much Ephraim Gerard! Here's to another awesome year in store for you!

Posted by Contranaut Girl at 11:10 AM